ALL PRIMARY BATTERIES consist of a positive electrode (the cathode), a negative electrode (the anode), and an electrolyte*. The electrolyte is a conductive medium that promotes the transfer of electrons from the cathode to the anode, and then to the external circuit (your flashlight, or whatever). The following paragraphs describe how each battery type is constructed.

In the beginning, all batteries were primary batteries. They’re called primary because the energy comes directly from the materials that comprise them, rather than a second source such as a generator (which, of course, gives rise to a secondary battery). The active materials in a primary cell are irreversibly consumed during discharge.

The zinc-carbon “dry cell” was developed in the late 1800s, based on research by Georges Leclanché. The name is misleading: carbon isn’t part of the cell reaction, and the cell isn’t dry.

By 1900, the dry cell (Figure 1a) was made in a zinc can, the anode, with a block of manganese dioxide as the cathode. The electrolyte was an aqueous (that is, water-based) paste of ammonium chloride. Binding the liquid electrolyte in the form of a paste allowed the cell to be used in any position. The manganese dioxide cathode was mixed with carbon powder to improve conductivity, and a carbon or graphite rod acted as the electrical terminal for the cathode (positive terminal). The carbon rod is only a current collector and isn’t part of the chemical reaction during discharge.

The development of the dry cell made practical such things as flashlights and portable lighting. The design was a vast improvement over “wet cells,” since it had much lower self-discharge, and therefore a longer shelf life. The design was further improved by replacing some of the ammonium chloride electrolyte with zinc chloride, which is less corrosive. The “heavy-duty” type of dry cell available today uses primarily zinc chloride in the electrolyte.

Figure 1a: A zinc-carbon cell cross-sectional diagram & cross-section of actual cell. Courtesy of Mcy jerry from https://en.wikipedia.org/wiki/ Zinc-carbon_battery under CC BY 2.5 license. 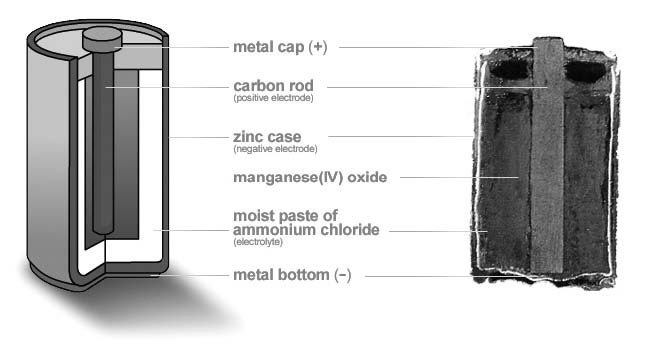 Dry cells, being the lowest cost primary battery, are ubiquitous, usually being the battery of choice for original equipment in toys, games, and other consumer products. They have a slightly higher initial voltage than other types of zinc-based primary cells.

On the downside, they are more prone to leakage. The zinc can is consumed during discharge, eventually allowing the corrosive electrolyte to leak out and ruin your flashlight. At elevated temperatures, the electrolyte dries out, even if it doesn’t leak, reducing long-term capacity.

They’re limited to relatively low discharge rates (that is, low current), although they can self-recover from intermittent high-rate discharge, providing a little more life. Just sitting on the shelf, they self-discharge, reducing their service life. Put them in the freezer for longer shelf life but don’t forget that they are there. Be sure to warm them up before putting them into service. At low temperatures, capacity is reduced, but the cells usually recover nearly full capacity when they are returned to room temperature.

Don’t believe people who try to sell you a charger for zinc-carbon cells. It doesn’t work, and it may be dangerous. All that a charger can do is depolarize any cathode material that has become unavailable to the positive terminal due to an intermittent high-rate discharge; it doesn’t “reverse” any of the discharge. Gas is produced internally during attempted charge, which may force electrolyte leakage to increase. Since the zinc can becomes thinner with discharge, a charger increases the likelihood of leakage, with consequent damage to equipment.

As in the zinc-carbon cell, graphite is mixed with the manganese dioxide cathode to improve conductivity. Also, “sacrificial” zinc powder can be added to the electrolyte to decrease self-discharge; the result is that the shelf life of an alkaline-manganese cell can be up to four years at room temperature, compared to about 1.5 years for a zinc-carbon cell.

While initially more expensive than zinc-carbon cells, the in-service cost of alkaline-manganese cells is typically about half that of zinc-carbon because of higher capacity and longer shelf life.

They’re also better than zinc-carbon for applications at low temperatures – which reduce the performance of any battery system. They are superior to zinc-carbon in any application where long standby life is important, such as a flashlight in your glove compartment. In any event, it’s important to have a regular schedule for examining and replacing dry cells in portable devices, to prevent electrolyte leakage from damaging your stuff.

The alkaline-manganese cell is manufactured in a steel jacket. While this makes the cell more resistant to leakage than zinc-carbon, leakage is still possible, especially if the cell is discharged past its useful service point, and/or left in equipment in a discharged condition. The KOH electrolyte that leaks out is hygroscopic (absorbs humidity), and can do serious damage to the equipment by spreading beyond the battery compartment.

There are several “chargers” on the market for alkaline-manganese primary cells. Some users of these devices report success in extending the service life of their cells. There are some caveats, though:

You may get a little extension of useful time, but you’re taking a chance. Do you want to put a recharged cell in your $300 noise-canceling headset, for a flight to LA, and have it leak over Chicago?

The term “lithium”, when describing primary cells, refers to a staggering array of different chemistries. The most common chemistry in use for consumer products is Li-MnO2 (lithium-manganese dioxide), used in such popular button or coin cells as CR2016 or CR2032. You probably have one of those in your watch or your car’s keyless entrance transmitter.

Lithium is an attractive anode material because of its light weight, yielding cells with high energy and power densities. The Li-MnO2 cell has an open-circuit voltage of 3.3 V, allowing it to replace two zinc-based cells in series. Other chemistries, such as lithium-iron or lithium-iron sulfide, can be used to design a cell with 1.5 V open circuit, to be a drop-in replacement for zinc-based cells. Most of these chemistries use metallic lithium as the anode.

Lithium, of course, has one disadvantage: on exposure to air, it will combust violently, usually described as an explosion. It also reacts violently with water, so lithium primary cells must use a non-aqueous electrolyte. The electrolyte has a high internal impedance, limiting the usefulness of most lithium primary cells to low-drain applications.

“Exploding” laptop computer and mobile phone batteries (actually, they only smoke and burn, destroying the device) have had extensive news coverage in recent years. While these are rechargeable batteries, not primary, they have given lithium some bad publicity. Still, this has not prevented lithium from becoming the most popular choice for portable devices. Though some primary lithium chemistries may explode spontaneously if they are accidentally short-circuited, they are not generally used in consumer products.
Just to be safe, never try to open a lithium cell.

This lithium primary cell is characterized by very high energy density and low self-discharge rate at normal room temperatures. It’s good for low-rate applications where long service and/or standby life are required, such as watches. It’s also capable of intermittent high-rate discharges. It’s proven to be very reliable; just don’t take a hacksaw to it.

Lithium-iron disulfide cells are suitable for high-rate applications, and can be used to replace alkaline-manganese cells, since their terminal voltage is about 1.5 V. They have about three times the energy and power densities of alkaline-manganese, a flat discharge curve, low internal resistance, and very low self-discharge. Shelf life at room temperature may be measured in decades. They’re ideal for both continuous and intermittent highrate applications, such as cameras and toys. Of course, they also cost about three times as much as alkaline manganese. That seems to limit them to applications where they excel over other types: long standby life, followed by a high-rate discharge.

There are several other primary battery systems in common use. These generally have a small number of specific applications.

As the name implies, zinc is the anode, and the cathode uses oxygen for the chemical reaction. Since zinc is a relatively light metal, the cell has a high energy density. Because zinc is less reactive in air than lithium, zinc-air is a much safer cell than lithium. Small Zn-Air cells are widely used for hearing aids and cameras.

They’re commonly called “silver cells,” but, of course, zinc is the anode. Did you expect anything different? The electrolyte is potassium hydroxide or sodium hydroxide. Although they have high energy density, their use is limited to small button cells (calculators, watches, and the like) because of the high cost of silver, or to large batteries used by the military, where cost may not be an obstacle. Some silver oxide cells can be recharged.

The mercury cell is based on a mercury oxide cathode (or a combination with manganese dioxide), and – guess what? – a zinc anode (by now, you’ve bought some zinc mining stock, right?). The electrolyte is potassium or sodium hydroxide. The mercury cell has the advantage of constant output voltage over its service life, and a long (10-year) shelf life. It was used in, for example, cardiac pacemakers, cameras, and hearing aids.

It’s academic, though, since they are no longer commercially available because of the mercury content. They’re described here to complete the historical record.

Table 1a shows a comparison of features for commonly available primary cell types. 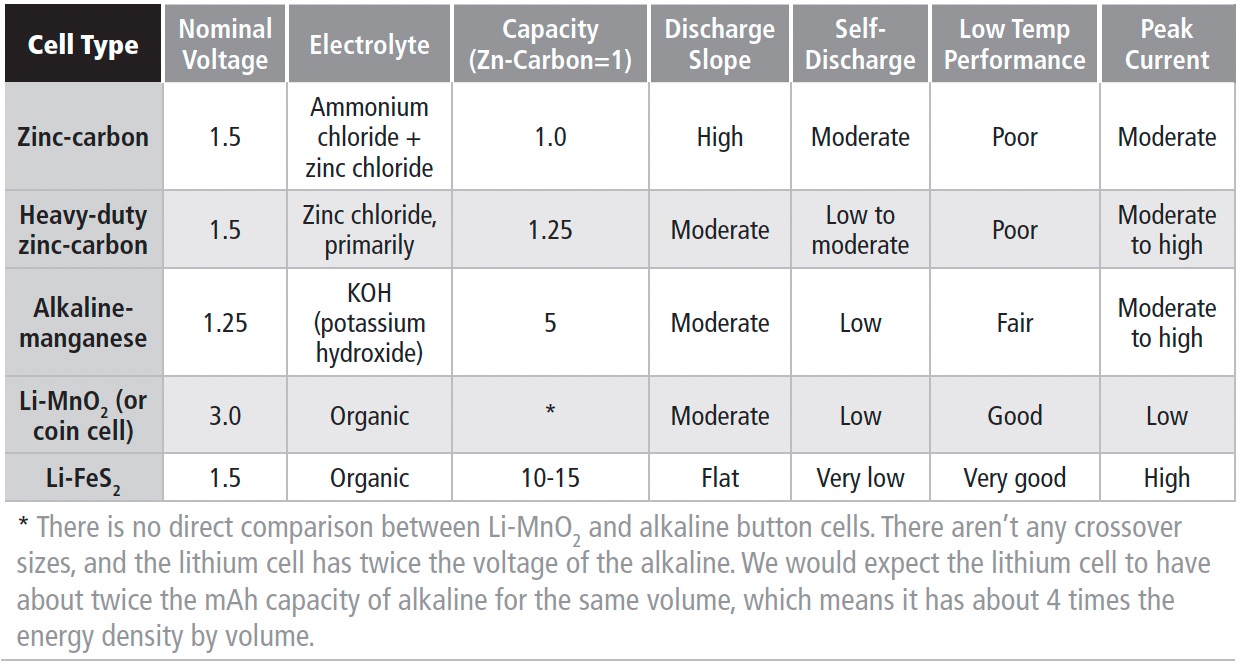